LGBT Filipinos observed the 2016 International Day Against Homophobia, Transphobia and Biphobia (#IDAHOT2016) with a call – aligned with the international LGBT community’s call – to stop the pathologization of LGBT people.

This year’s observance, themed “Mental health and well being“, highlighted that “sexual and gender diversities are still characterized by many states and by a majority of people worldwide as mental heath problems, and these definitions then feature at the heart of public persecution, discrimination and social stigma. Even in more progressive places, this assumption, albeit unconscious, still lies at the root of many barriers to full equality for LGBTI people.”

According to Naomi Fontanos of Gender and Development Advocates (GANDA) Filipinas, “homophobia, biphobia, and transphobia, or the negative attitudes towards lesbian and gay, bisexual and trans people respectively, continue to rob LGBT people of their dignity and most basic freedoms. Up to now, it is still illegal or a crime to be LGBT in 79 countries. In spite of the fact that homosexuality has long been delisted as a mental disorder, gay and lesbian people continue to be stigmatized for their sexuality. The identities of trans youth and adults are still viewed as psychopathological, a disorder or disease. These are the reasons why it is important to observe IDAHOBIT.”

GANDA Filipinas hosted a photo campaign with Outrage Magazine and Rainbow Rights Project (R-Rights) to highlight that LGBT people are #WellAndFab – i.e. there is nothing wrong with being LGBT, and that “the struggle for dignity, equality, and justice for LGBT people around the world continues and IDAHOBIT is a reminder for all of us of the work that needs to be done,” Fontanos ended. 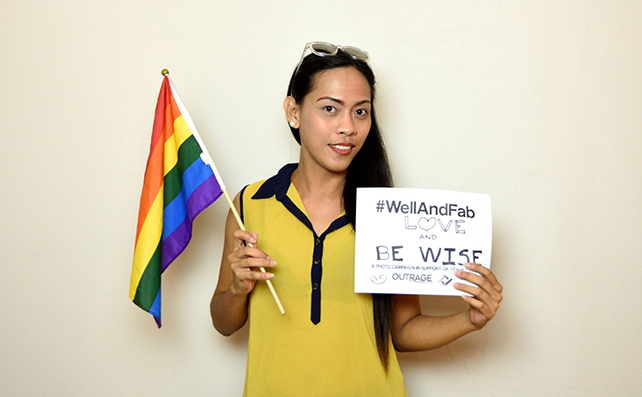