Spearheaded by UPLB Babaylan, an LGBTQ support group in the University of the Philippines–Los Baños, this year’s Pride was themed “Celebrating identity, liberating Philippine society”. UPLB Babaylan’s expression of support to House Bill (HB) 1483, HB 4635, House Resolution (HR) 1432 and HR 1333 – legislations that would advance the human rights of LGBT people in the Philippines.

In a statement provided to Outrage Magazine, UPLB Babaylan reiterated that “one’s LGBTQ identity is something to take great pride in, and that the struggle of the Filipino LGBTQ is tied to the struggle of the Philippine nation. By the term ‘liberating’, we do not just intend to fight the patriarchal and discriminatory nature of our society, we also intend to campaign against such issues as oppressive job policies and neocolonial agreements — issues plaguing the Filipino people from which the LGBTQ are not exempt.”

The Southern Tagalog Pride also highlighted other issues affecting the LGBTQ community in the Philippines.

Prior to its folding, the now-defunct Philippine LGBT Hate Crime Watch noted over 160 LGBT killings in the country since 1996, though many LGBT-related crimes may have been unreported, thereby unaccounted for. At least one infamous case is that of Jennifer Laude, allegedly under the hands of American serviceman Joseph Scott Pemberton on October 11, 2014.

“Violence toward LGBTQ people is indeed rife yet tolerated by society. Many institutions in the country, such as schools and workplace, breed repressions of the LGBTQ people through dress codes, strerotypes and gender roles often dictated by those in authority. This is made worse by cases of prejudiced dismissal or removal due to discrimination based solely on sexual orientation, gender identity and expression (SOGIE). LGBTQ individuals, particularly the youth, continuously thrive in an atmosphere of fear and unacceptance, much of which are often brought upon them by their own families. While some display their LGBTQ identity with ease, others are not so fortunate and are made prisoners by fear of criticism, rejection, or violence,” stated UPLB Babaylan.

The 5th Southern Tagalog Pride March is therefore calling for laws to be passed to protect the betterment of the LGBTQ situation in the county.

House bills and resolutions, such as HB 1483 or the “Anti-Discrimination Bill” authored by Bayan Muna Representative Teddy Casiño, would “significantly diminish violence and discrimination based on SOGIE and would make the State accountable for acts that go unpunished”. HB 4635, also authored by Casiño, calls for the declaration of the 17th of May as the “National Day Against Homophobia and Transphobia” or NADAHO. Meanwhile, HR 1432 – also filed by Casiño – is demanding Congress to investigate murders and other hate crimes committed against members of the LGBTQ community.

Also in support of the protection of LGBTQ people in schools, HR 1333 – filed by Kabataan Partylist Representative Raymond Palatino – aims to study and eliminate unjust practices and policies against LGBTQ people that hinder equal education opportunities for them.

None of these bills has been prioritized by the Benigno Aquino III administration.

For UPLB Babaylan, LGBTQ issues also need to be considered in the wider scheme of things since “LGBTQ Filipinos, as Filipino citizens, are not unlike others who are equally victimized by (a negligent government).

The Pride event, therefore, called for the “the liberation of the Philippines not just from bigotry or discrimination, but from everything that shackles the real freedom of the nation.”

“We march so that we may celebrate our identity and militancy as the Filipino LGBTQ,” UPLB Babaylan ended. 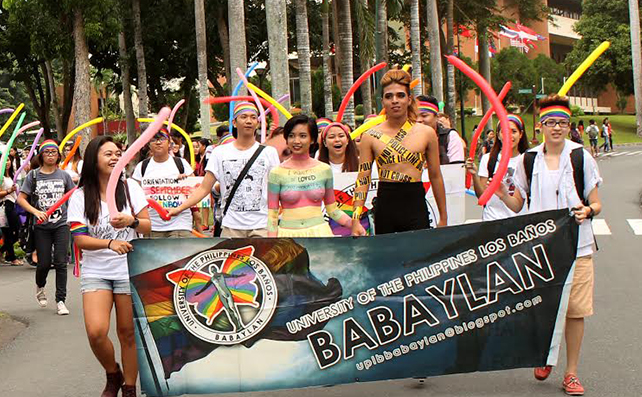 Half of transgender patients leave home state for surgery – study

WHO declares monkeypox as public health emergency of international concern

The Supreme Court (SC) of the Philippines joined Pride Month celebrations to encourage members of the judiciary to "contribute to the advancement of gender...