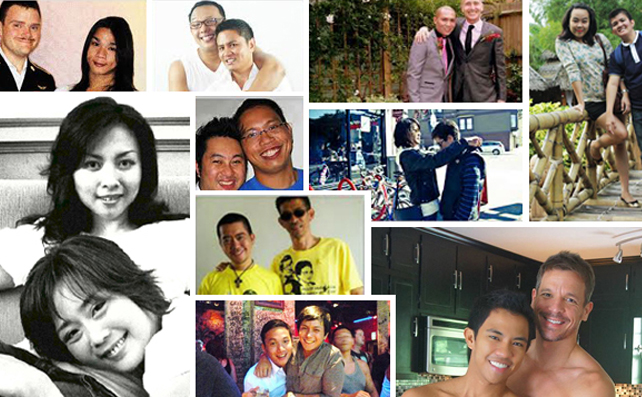 It’s a bumpy ride inside the Jeepney marked ‘Proj.8’ as it swerves, stops and seek out potential passersby while the diesel-guzzling smell permeates one’s nostrils. And it’s in Project 8, a district of Quezon City, Philippines, where the fame Beki House stands with open arms for its weekly scheduled Sunday service.

Part-housing and part-chapel, it serves as the ceremonious venue for same-sex weddings, headed by Fr. Crescensio Gaba Agbayani, Jr. of the LGBTS Christian Church, and his partner.

While the Philippines doesn’t recognize same-sex marriages, two same-sex couples – including Fr. Agbayani – applied for their marriage-licenses at the Civil Registry Office in Manila on 3 August 2015.

And it’s a first in a predominantly Roman Catholic country. 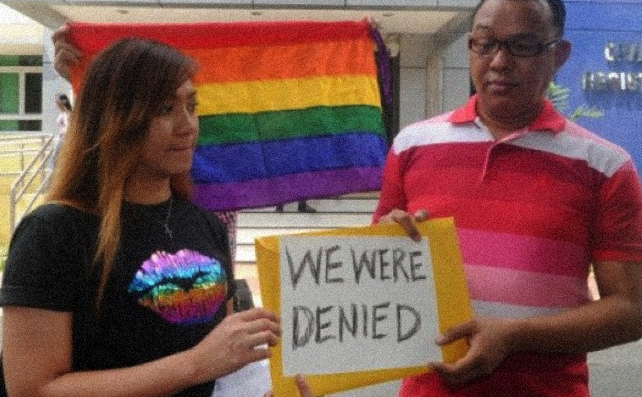 Fr. CJ Agbayani Jr. of the LGBTS Christian Church (at right) and Arlyn “Sugar” Ibanez outside of Manila’s Civil Registry on 3 August 2015

MAMMOTH TASK: “WE WERE DENIED”

Before each wedding ceremony, Father Agbayani holds a premartial counseling session with the marrying couple, asking each party about their views on marriage.

“My definition of marriage is a union of two consenting adults that promise to live and to be together for the rest of their lives in a loving relationship,” says Father Agbayani inside his Beki House. “Beki” is part of the Filipino gay lingo that refers to gay.

Since 2008, Father Agbayani has performed 608 Holy Unions. And the number is increasing.

“The word marriage in Tagalog is beautiful. It’s called katuwang (partner). But I like it in Tagalog. Your [partner] is not in front, not in back: he’s katuwang – at the same level.”

But through the eyes of the Philippine government, members of the LGBTQI (Lesbian, Gay, Bisexual, Transgender, Queer and Intersex) community, they are seen and treated differently.

According to Being LGBT in Asia: the Philippines Country Report, produced by the Third Philippine National LGBT Community Dialogue (or the “Dialogue”) in 2013, family affairs, for one, need “to be reviewed, amended and repel existing laws and policies that criminalize or make diverse sexual orientation and gender identity fraudulent or legitimate.” These also include having to reform the Penal Code, Family Code, the existing case laws and jurisprudence of the country.

On 19 May 2015, Filipino lawyer Jesus Nicardo Falcis III filed a 31-page petition to the Philippine Supreme Court to allow same-sex unions. Released by the Supreme Court, Falcis wants to invalidate the portions of Article 1 and 2 of the Executive Order 209 (or the Family Code) of the Philippines that define and limit marriage between a man and a woman.

Falcis argues that the Family Code violates Article 3, Section 1 where it stipulates “No person shall be deprived of life, liberty or property without due process of law, nor shall any person be denied the equal protection of the laws” and Article 15, Section 3 (1), “The right of spouses to found a family in accordance with their religious convictions and the demands of responsible parenthood.”

And because of Falcis’s actions, the ‘Foursome’– Father Agbayani and his partner; Arlyn “Sugar” Ibanez and her partner – were inspired to file for their marriage licenses at Manila’s Civil Registry office the morning of August 3.

On 26 June 2015, the United States Supreme Court allowed same-sex marriage to be legal nationwide. But the issue of separation of Church and the State still remains controversial as seen in the case of American county clerk Kim Davis who has refused to issue marriage licenses to anyone. She was sent to jail for her actions.

“The key is to open people’s minds and hearts to the possibilities outside of the usual nuclear family model. And I believe that is happening right now,” says Filipino lawyer Raymond Alikpala, author of Of God and Men: A Life in the Closet, in an email interview.

“But the developments in the US were speedy in the context of the long arc of history so this could affect the movement of history as well,” he says.

Alikpala was once a nominee of the Ang Ladlad PartyList – the first and only political party by and for lesbian, gay and transgender (LGBT) Filipinos, according to its website. “Ladlad” evokes the image of an unfurling cape in the wind and the word also means “to come out of the closet, to assert one’s human rights as equal to that of the next Filipino.”

But no seat was won at the national legislature in the Philippine 2013 general election. 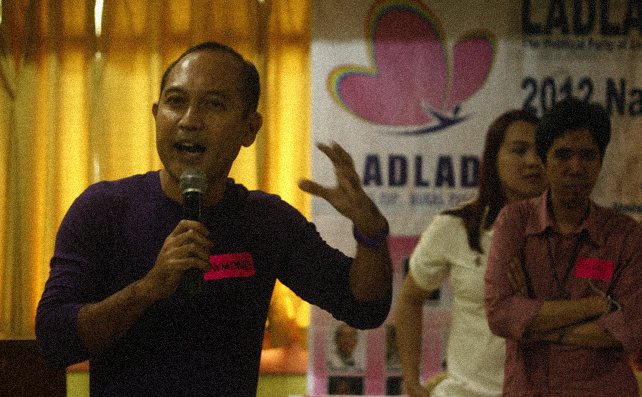 Asked about why the Foursome decided to directly file for same-sex marriage licenses, “there was someone who came over and told us that we should get civil unions rather than same-sex marriages because that will pass. But the argument of Atty. Francis is that it’s seen as a form of segregation. To me, that’s how I view it. Why give civil unions to LGBT and not marriages? Nobody owns marriage. It’s a social construction,” says Fr. Agbayani.

On 30 August 2015, the Catholic Bishops’ Conference of the Philippines (CBCP) released their “Question and Answer Catechisms on the Dignity and Vocation of Homosexual Persons” document where they urge the government not to legalize same-sex unions and for individuals to oppose any such proposals.

The Philippine bishops want to push out the special privileges for homosexuals in the majority-Catholic country and have affirmed in the document that marriage is “the institution established by God for the foundation of the family.”

“The judicial fight for same-sex marriage has not really yet begun. Let us wait and see how the Supreme Court will respond to Atty. Jesus Falcis’s petition,” Alikpala says. “Atty. Falcis must be given credit for his boldness in bringing the fight for LGBT equality and same-sex marriage before the Philippine courts.”

The Anti-Discrimination Bill filed in 2000 by the Lesbian and Gay legislative Advocacy Network, the main proponent of the anti-discrimination bill (LAGABLAB) as mentioned on the International Gay & Lesbian Human Rights Commission website, is meant to protect the rights of each and every citizen regardless of their sexual orientation and gender identity in the Philippines.

But the bill has yet to be ratified by Congress.

Fr. Agbayani points out another factor: credit-centered where there are those who want to be credited for their triumphs such as in the case of the Anti-Discrimination Bill.

“There are, however, very real differences such as the conviction that same-sex marriage is not the most important issue for our community and should not be the priority at this time. It won’t be easy to unify the community but I remain hopeful that we will be able to do so someway, somehow,” says Alikpala.

More pressing issues for some include education, health, employment, family affairs, religion, community, media and politics as mentioned in the Dialogue where 50 LGBT organizations representatives had gathered to discuss the human rights of LGBT people and created a list of 51 specific recommendations and action points.

And within the ‘L-G-B-T-Q-I’ community, each letter is perceived unequally where the Gays and Lesbians have often been seen at the forefront for change while Bisexual and Trans* groups for instance are misunderstood. Also, Queer and Intersex still remain new concepts to the public. 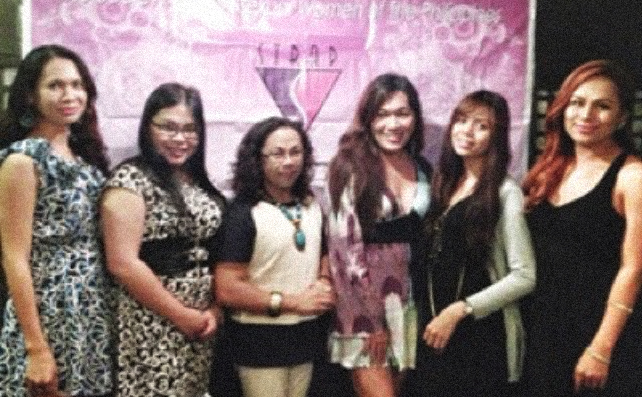 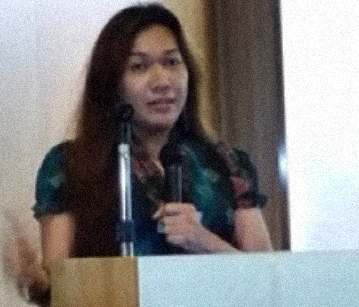 “The government should form a coop or work with local LGBT groups with funding assistance so we may work closely with grassroots-based groups and to educate them too,” says Dr. Brenda Alegre, a transpinay and lecturer of sexuality and gender at the University of Hong Kong, regarding the status of trans* people in the Philippines in an email interview.

She is also a member of STRAP – the first trans* group who work closely with some schools and universities like La Salle, University of the Philippines and Ateneo University.

“Trans* from indigenous groups and those who did not obtain any form of education may be suffering the most because of lack of access to information.”

Dr. Alegre says while tolerance is accepted for trans* groups, acceptance is not.

“Same-sex unions are only for those who wish to marry someone they perceive as their same-sex. This can be troublesome definition for some Filipinos. Trans* people can be LGBS too. It can be pansexuals or asexuals too. So the law should also address: ‘how about trans* people?’ that includes those gender fluid and gender neutral trans* people. But one step at a time. Same-sex marriage, if approved, is one big step,” says Dr. Alegre.

“DON’T JUDGE A BOOK BY ITS COVER”

Night falls outside of Beki House after the scripture reading, songs were sung, personal testimonies were spoken and prayers heard – all under the guidance of Father Agbayani.

From afar, it has been your typical mass except three gay men and three transpinays sat and listened to Fr. Agbayani’s sermon on “Don’t Judge a Book by its Cover.”

Transpinay Dudhay, 22, once made Beki House her home last year when she ran away from her own home. And Beki House has become a springboard for her to know more about her own rights.

“I learned to fight first of all. To fight for myself and for my rights as a human being… To people who look down on us because we’re [cross-dressers], what we can say is: ‘Don’t laugh at us.’ They don’t know us’, ” Dudhay says.

With the rise of social media in the country, Fr. Agbayani is hopeful that perception of the LGBTQI community is changing because social media has allowed information to be disseminated faster.

“Acceptance is about understanding. To accept a person, you’ll need to understand. It’s easier to accept a person when you understand that person… The Philippines is a secular society with different beliefs, religion and one country. And we’re all under one constitution,” Fr. Agbayani ends. 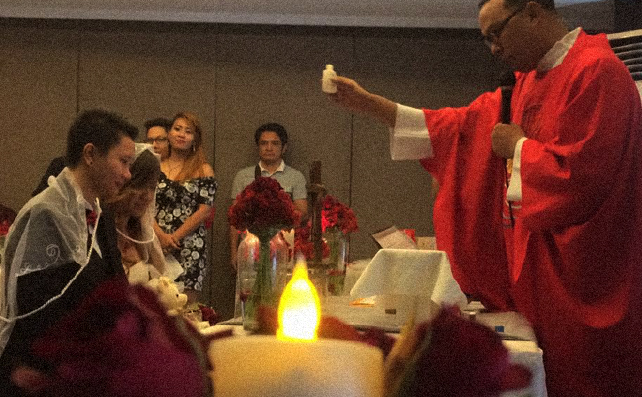 Jefferson Mendoza is a contributing editor for HK Pinoy TV.
He is currently based in Hong Kong. 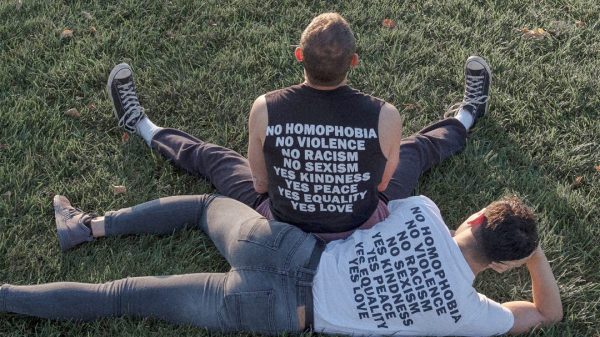 Being a responsive partner - one who focuses effort and energy to listen to their partner without reacting, tries to understand what's being expressed... 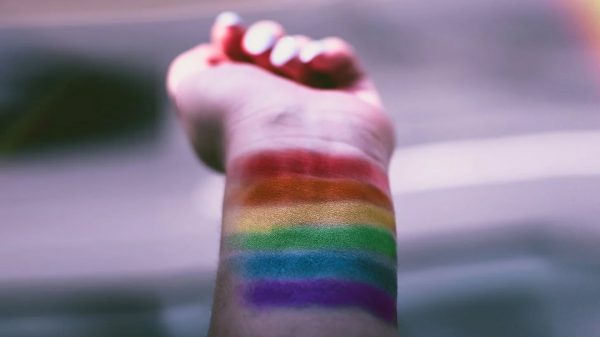 The role of adult playfulness in romantic life 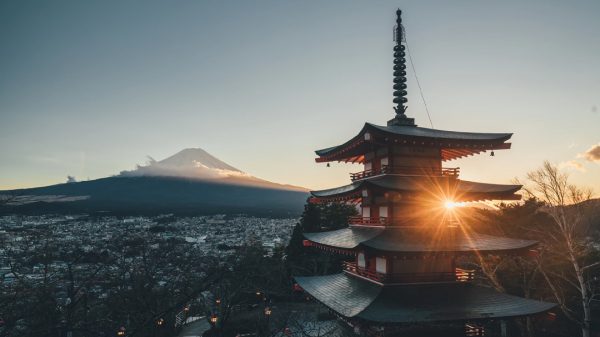