It all started in 2002, when select members of then popular social networking site Guys4Men.com established a chat room called “TRIPPERS”. This “brotherhood” eventually “blossomed”, with these members deciding to form a Luzon-wide clan (that is, an informal group of men who have sex with men or MSM who are often connected through newer technologies) known as “Trippers Wild Clan” on February 5, 2005. The group was initially based in the province of Cavite, though its members came from all over, converging via a Website.

“Chapters” started sprouting like mushrooms, including in the provinces of Nueva Ecija, Bulacan, Cavite, and – obviously – the National Capital Region. By May 1, 2011, Trippers Wild Clan was re-named to Trippers Philippines – its current incarnation – with the once-informal group eventually becoming a legally recognized organization after registering with the Securities and Exchange Commission (SEC). It was also eventually accredited by the National Youth Commission (NYC), Quezon City Pride Council (QCPC), and the Quezon City Government.

With the growth came changes in the group’s driving forces. If, in the past, it was merely to provide members of the LGBT community an avenue to “gather” (online or offline), Trippers Philippines eventually started focusing more on human development and empowerment.

Leadership came from the president Rico Suave (a.k.a. AsianHunk), who helped grow Trippers Philippines in over 25 cities and provinces all over the country, with over a thousand members.

Like other organizations, Trippers Philippines is not immune to challenges. Primarily, its issues do with resources and funding, and – somewhat ironically – the fact that it has become so big (i.e. the diversity of the structures in various geographic locations of the chapters).

To deal with issues on resources and funding, Trippers Philippines developed a relationship with the Quezon City local government to “alleviate certain limitations on resources by providing manpower to the institution; as well as with other organizations in the private sector that share the same mission and vision as the group.”

Meanwhile, to deal with the diverse geographic structures, the president decentralized the running of the chapters. As such, so-called “provincial houses” have their gown events, monitoring systems, et cetera – so long as these are aligned with the organization’s principles and standards.

Trippers Philippines believes that what makes it different from other groups in existence is its reaching out to the people not only from within the LGBT community, but also outside. Similarly, not only members of Trippers Philippines are served. The served populations include barangays, youths, et cetera. 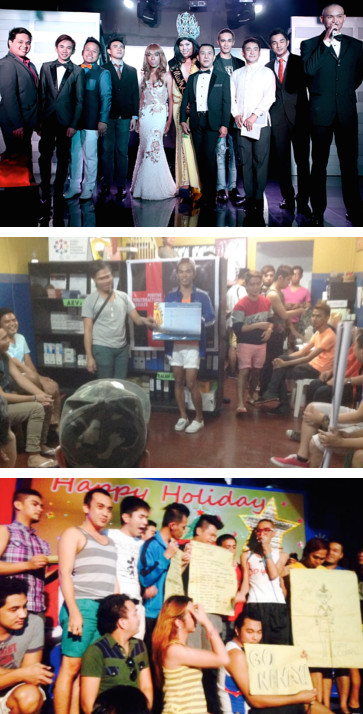 Trippers Philippines has numerous achievements it is proud of.

In 2011, for instance, it was commended by the Department of Health and the Quezon City Health Department for spearheading an HIV awareness campaign for MSM with the use of SMS. In the same year, it conducted a joint fundraising project with GMA Kapuso and the Quezon City government for the victims of typhoon Sendong. In 2012, Trippers Philippines conducted “ PROJECT TRIPPERS HELP” with the Rotary International. Also in 2012, it conducted “PROJECT KALAYAAN” to reach out to 105 children of a remote Island barangay in Laguna, which still has no electricity and ample shelter.

For his leadership, Trippers Philippines’ president – Suave – received the Giting Awards in 2011; and the 911 TOD HILL Humanitarian Award in 2013.

Trippers Philippines, meanwhile, was a finalist in the annual NYC’s search for Ten Outstanding Youth Organization of the Philippines (2012 and 2013). It was also named by Pinoy Guys4Men as “clan of the year” from 2011 to 2012; and as “best of the best” among clans in the Philippine Hot Clan 2014.

Trippers Philippines now has houses as far as the Visayas and Mindanao. With the continuing growth, it continues to aim to “change the mindset of the community on LGBT people, and acceptance of our existence as valued (members).”

Growing is of course an organizational direction. And to attain this, each “house” (i.e. chapter) has an appointed recruitment officer who helps grow the membership.

Everyone interested can, of course, express their interest to join by accessing Trippers Philippines’ various chapters.

Many of the men who participated in the survey told that their dance group was a family or a community of sorts, one that...