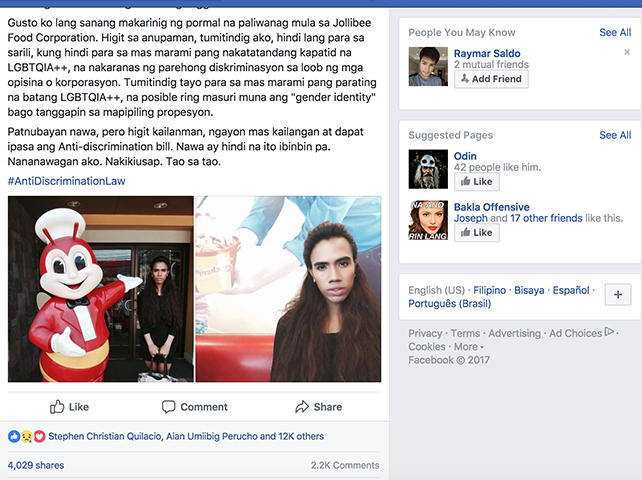 In a Facebook post dated August 9, Cadag narrated how they was interviewed for a job as a transcriber by people from the Human Capitol Development (HCD) at JFC’s main office in Ortigas. That first day of evaluation passed without incident. However, when Cadag returned another day to continue the training session, a certain Louie Angsico, said to be one of the contact persons of HCD, spoke with Cadag over the phone to tell them that JFC is not yet “welcoming to the idea” of having a transgender person working for the company. Angsioco allegedly added that JFC is a Roman Catholic company.

To file a formal complaint, Cadag emailed Angsioco on July 3; but no response was received. Cadag also sent a message outlining their experience to JFC’s Facebook page; this remained “unseen”. Cadag similarly sent a complaint letter through JFC’s website, with this one getting a response to tell them to be given three days to investigate the issue. As a last effort to directly coordinate with JFC, Cadag called JFC’s customer service after the three days were up, only to be told that the company needed an extension. Until Cadag posted their story online, JFC did not even reach out to them.

Beyond JFC and its arms, Cadag said they also went to the gender office of the Commission on Human Rights (CHR) of the Philippines. They was told that their case will be handed to an investigator; though – again at the time they posted their experience online – Cadag said they found out that still no one in CHR was handling their case.

Interviewed by Outrage Magazine, Cadag said that the ordeal “was a sad and frustrating, in a way. I never thought that it I would be singled out (because of) how I present my self, instead of the work itself.”

Cadag said that their posting of their story online aimed to do two things. On the one hand, “I wanted to call out Jollibee’s attention regarding this incident since I never got a feedback from them through their website, customer service Hotline and Facebook Page,” they said. But “I (also) wanted to raise awareness among the members of the LGBT community (about discrimination).”

JFC finally released a response following the PR damage its anti-LGBTQIA move made, with the company saying that it “assures everyone that this is an isolated incident as JFC does not in any way tolerate any disrespect, discrimination, harassment, violation or intimidation of any person, consistent with our company policy on diversity and inclusion.”

Highlighting this as a PR move, JFC had not even reached Cadag yet when it posted its response to the “unfortunate incident as relayed in Bunny’s Facebook post”.

JFC eventually released a follow-up “official statement”, claiming that – after completing the internal investigation – it found that the “unfortunate incident was brought about by the actions of one employee and a representative from one of our consultants who were both not authorized to act or speak on behalf of the company and who have not acted in a manner that is aligned with our policy.”

As per JFC, “both of them have realized their mistake and have sincerely apologized for this”, though no sanctions were mentioned to have been meted for the anti-LGBT violations.

“I’ve accepted the apology because at the end of it all, it was never about me. This is about the whole LGBTQIA Community. This is a call for equality and for our protection against discrimination,” Cadag said.

JFC’s statement added that the company will heighten awareness and understanding of sexual orientation, gender identity and gender expression (SOGIE) among its employees, and there are already plans to conduct SOGIE training to all JFC employees.

For Cadag: “I believe this is a good start.”

This is not the first employment-related issue faced by JFC, which is also plagued by the contractualization issue that affects its workforce including LGBT employees.

*The singular they is used here as a gender-neutral pronoun, and as requested by Bunny Cadag, befitting their gender identity.
For those still not comfy with the use of the singular they, refer to MERRIAM-WEBSTER.

Where is this ‘Pride’ headed?

Intersex people are at risk in this country

Eastern Telecommunications Philippines Inc. (ETPI) advocates for diversity in the workplace by partnering with the Association of Image Consultants International (AICI) and the Australian-New...