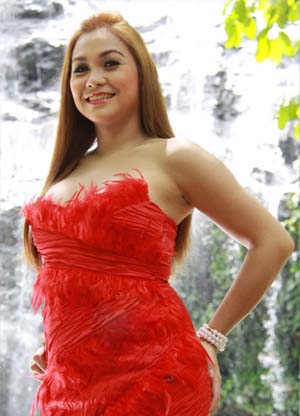 Newly crowned Queen of Antipolo 2013 Dimple Fortallejo now enjoins others to “support all the projects of our organization, TAO, in fighting for the rights and issues of transgender Filipinos.”
PHOTO COURTESY OF T.A.O.

The Transpinay of Antipolo Organization (TAO) has announced the crowing of the Queen of Antipolo. Dimple Fortallejo bested other TAO competitors to win the first-ever such competition – a feat she considers as “my new greatest achievement in my life,” she said.

TAO is an Antipolo-based group established in 2006 by five transpinays – Kristine Madrigal, Alexis Garcia, Em Bayubay, Jersey Paceno and Shane Marie Madrigal – to help push for gender equality, particularly transgender issues, in the Philippines. It is largely composed of transpinays, though the organization also counts among its members other members of the lesbian, gay and bisexual community.

In an earlier interview, TAO president Shane Marie Madrigal said that the winner of Queen of Antipolo 2013 is eyed not only to become the new face of the organization, but is also hoped “to become a role model to her fellow transpinays.”

More than feeling “happy and blessed for winning the crown (as the first Queen of Antipolo),” transpinay Dimple Fortallejo said that she recognizes that the title carries with it expectations and responsibilities. And so “I want to be a good example and serve as a good role model to… transgenders,” she said.

Fortallejo now enjoins others to “support all the projects of our organization, TAO, in fighting for the rights and issues of transgender Filipinos.”

“To all the members of the transgender community, just be what you are and continue dreaming,” she said, “so that in the end, the crown of success will be yours.”

Disrupted sleep is linked to increased risk of death, particularly in women

Early use of oxandrolone may augment adult height in trans-masculine youth. As such, according to the researchers, "height discussions should be part of comprehensive...

Meet Kristine T. Ibardolaza, the first transgender woman elected as barangay councilor in Antipolo City. She laments that "we long and crave for equality,...

Socially transitioned transgender youth (or those who openly identify and live as a gender different from their sex assignment at birth) show "normative or...

Pursuing graduate degree can be toxic for transgender and nonbinary students

Nearly 50% of graduate students report experiencing emotional or psychological distress during their enrollment in graduate school. Levels of distress are particularly high for...